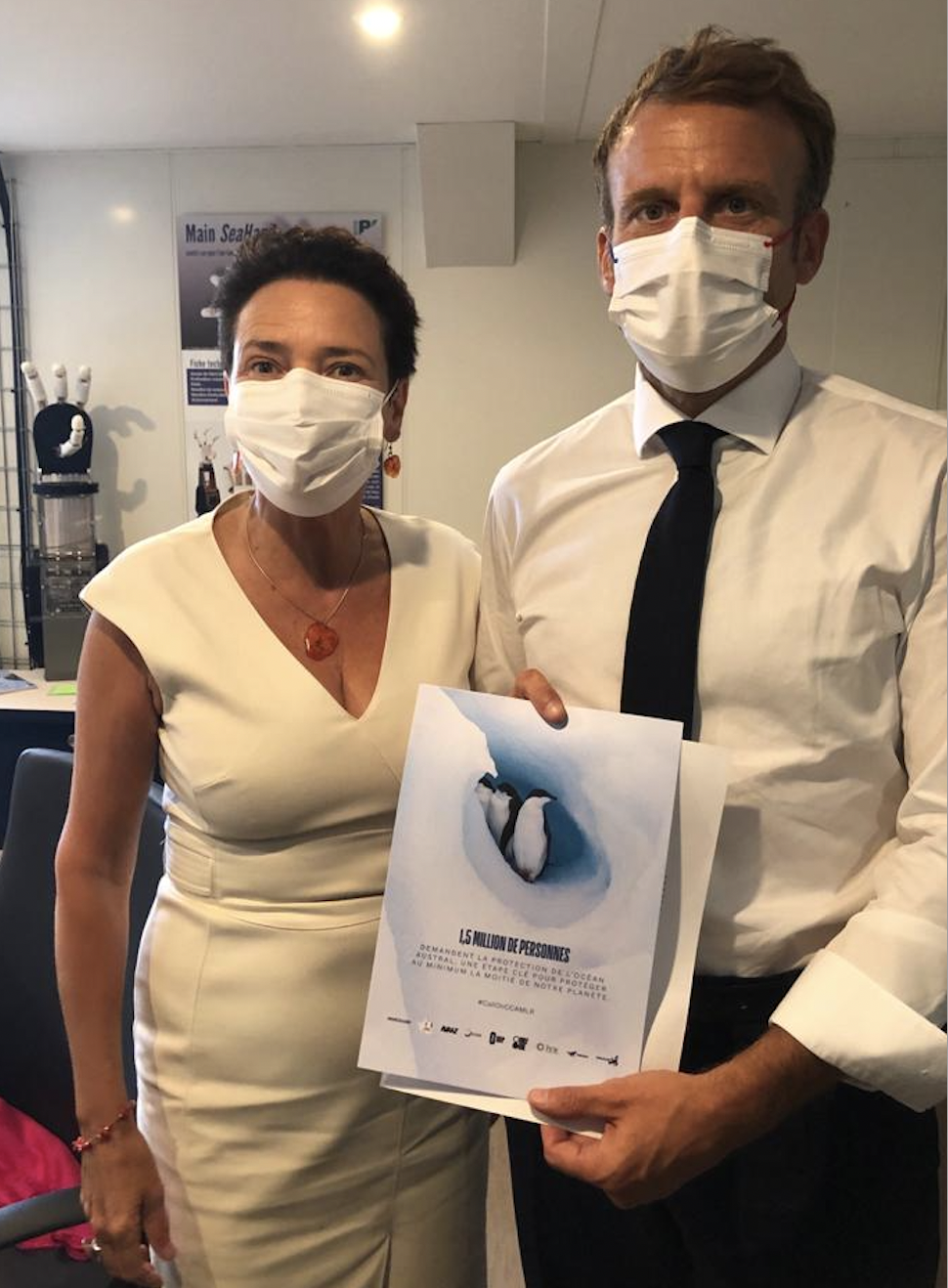 Today, during a boat trip organized on the first day of the IUCN World Conservation Congress in Marseille, Antarctica2020 members Pascal Lamy and Geneviève Pons (picture) handed a petition to President Macron on behalf of 1.5 million people that call for the protection of Antarctica. The petition is part of a campaign that is advocating for the designation of large-scale marine protected areas in the Southern Ocean to save these pristine wildernesses for penguins, whales, seals and other precious species. Tomorrow the petition will also be handed to European Commission President Ursula von der Leyen.

The IUCN meeting will be a key opportunity to highlight the important steps needed to safeguard Antarctica as a region under siege from the accelerating climate and biodiversity crises, ahead of an important meeting in October of the Commission for the Conservation on Antarctic Marine Living Resources (CCAMLR).  CCAMLR has the historic chance to protect nearly 4 million km2 of the Southern Ocean through the creation of three new large-scale marine protected areas in the East Antarctic, Weddell Sea and Antarctic Peninsula- protecting a further 1% of the global ocean.

Progress on extra Antarctic marine protection has been very slow, with governments stalling conservation decisions for years, unable to come to unanimous agreement on further protection. France, on behalf of the European Union, has been driving the proposal for protection of the East Antarctic, which was first submitted to the CCAMLR meeting in 2012. Currently only China and Russia are standing in the way of consensus.  With the spotlight on this key meeting in Marseille discussing the urgent need to increase protection of our natural world, it is vital to recognize the huge role Antarctica and the Southern Ocean play in the functioning of the planet.

“We must act urgently to safeguard Antarctica and through this petition, 1.5 million people have shown their support for action. President Macron has the opportunity to make history and we urge him in the coming weeks to make winning the support of China and Russia for Southern Ocean protection a diplomatic priority this year” said Pascal Lamy, President of the Paris Peace Forum and Antarctica2020 Champion.

“Just a few weeks ago leading climate scientists warned that climate change is widespread, rapid and intensifying with devastating changes underway in the ocean. The actions we take now are critical to make sure we save our planet. Protecting Antarctica’s waters this year will be a key step in this planetary rescue plan- providing a refuge for marine life from other pressures such as fishing as they try to adapt to a fast-changing climate.” Said Geneviève Pons, Director General and Vice President of Europe Jacques Delors and Antarctica2020 Champion.

Antarctica2020 is a group of influencers from the world of sport, politics, business, media and science that are working to ensure the full and effective protection of Antarctica’s Southern Ocean through a network of effective marine protected areas in the region. They are supported by Ocean Unite, The Pew Charitable Trusts and the Antarctic and Southern Ocean Coalition: https://antarctica2020.org

The Petition calling for Antarctic Ocean protection is a collaboration of initiatives:

The Commission for the Conservation of Antarctic Living Resources (CCAMLR) was established under the Antarctic Treaty System to preserve the biodiversity of the Southern Ocean. CCAMLR is a consensus-based organization consisting of 26 Members, including the EU and eight of its Member States. CCAMLR’s mandate includes fisheries management based on the ecosystem approach, the protection of Antarctic nature and the creation of vast marine protected areas allowing the ocean to increase the resilience to climate change.

In 2009, CCAMLR member countries began to undertake their responsibilities to establish a network of MPAs throughout the Southern Ocean and established the first high seas MPA on the southern shelf of the South Orkney Islands. In 2016 the world’s largest MPA was agreed in the Ross Sea (proposed by the United States & New Zealand; 2.02 million km2).